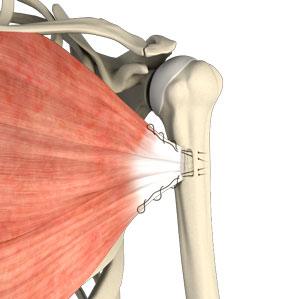 What is the Pectoralis Major Muscle?

What are Pectoralis Major Tears/Repairs?

A tear in the pectoralis major muscle occurs when the tendon attaching the muscle to the upper arm bone is damaged as a result of trauma or injury. In the case of a rupture, operative treatment is employed for repairing the torn muscle in active and young patients irrespective of the chronicity of the injury. The most commonly used techniques to repair a pectoralis major tear are suture anchors and bone tunnel procedures.

Pectoralis muscle tears occur when a force goes through the muscle and tendon that is greater than they can withstand. This can happen during weight training, such as with bench press, chest press, pectoral fly, or even contact sports.

Other common causes of pectoralis major tears include:

Diagnosis of pectoralis muscle tears can often be made through a physical examination and the changes indicating a muscle tear or rupture include:

Imaging such as X-rays, MRI, and ultrasound are used to determine and differentiate the extent and type of pectoralis injury and disorders and confirm the diagnosis.

The management of pectoralis major tears comprises of non-surgical and surgical methods. The choice of treatment depends upon the type and severity of the injury, the extent of muscle function, and the patient’s general health and activity level.

Non-surgical treatment is employed for patients with partial tears, rupture within the muscles, and elderly and low-demand patients. Nonsurgical management would include rest, cold therapy, immobilization, NSAIDs along with physical therapy for stretching and muscle strengthening.

Surgical repair is employed for patients with complete tears of the pectoralis muscle tendon and who either need to return to full strength and function as in sports or are concerned with cosmetic appearance.

The surgery is performed in the operating room under anesthesia in a supine position. A small incision is made on the upper arm where the tendon attaches. The torn tendon is identified and released from all adhesions to make room for sufficient mobilization required for anatomic reapproximation of the muscle. Your surgeon reattaches the torn muscle and tendon to the humerus (upper arm bone) utilizing anchors and strong sutures. Your surgeon then closes the incision by suturing or staples and cover with sterile dressings to complete the operation.

Post surgery, the arm will be rested in a broad arm sling for at least 6 weeks. Gentle pendulum exercises will be initiated during this juncture. This will be gradually followed by rehabilitation program culminating in exercises against resistance, and light weight lifting will be encouraged at 4 months. Post 6 months, patients typically will be able to return to competitive activity. Instructions on surgical site care as well as follow-up appointments will be given.

Risks and Complications of Repair Surgery

As with any surgery, some of the potential risks and complications of pectoralis major repair may include: